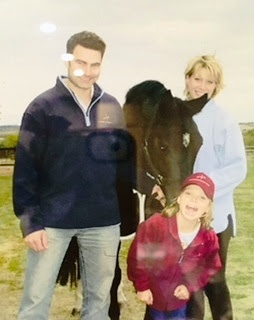 By now we had built and opened Ashen Equestrian Centre (I’ll come back to this another time), had had our son Max, and had invested in a riding simulator.  A new client came for a session and as I was showing her out I introduced her to Guy, she took one look at his surgically shod feet and suggested I meet her then husband, a barefoot trimmer called Antonio Checa.

I had always dismissed barefoot, I thought it was interesting but not for me or my horses.  I liked, needed and trusted my farrier and was fearful of burning bridges and losing him but the need to find a solution for Guy out weighed my fears and I booked a visit.  I liked Antonio from the start.  He was honest and self-effacing, he was defiantly more concerned with my horse’s welfare than telling me how wonderful he was and how terrible my farrier was or what a “bad” owner I was for my past mistakes.  He started trimming Guy regularly and advised me on some management issues to set us up for success.

I did a lot of research and changed Guy’s diet to forage only.  I reduced that amount of bedding in Guy’s stable to limit the exposure to his feet of ammonia and ultimately I virtually stopped stabling him all together, and I stopped clipping him out and rugging him up.  These were huge shifts for both of us, I had always clipped horses to within an inch of their lives believing it, shoes and big beds were a necessary part of being a responsible horse owner.

Once acclimatised to his new lifestyle Guy became a much healthier, happier horse and I realised that a lot of the ways I had managed horses historically had more to do with making me “feel” good than equine welfare.

I learned that horses benefit having their feet exposed to lots of different surfaces so, when possible I turned him out on our car park as well as in the paddock.  Of course this was not always practical and later we put an area down to crushed concreate and my horses benefit from that addition to the yard to this day.  I could hack Guy, but they were not relaxing or enjoyable hacks.  I could “make” him go, but I had stopped wanting to “make” horses do anything now I was exploring clicker training but as I was still “sugar-coating” rather than really training in a “clicker compatible” way the clicker was yet to have the “power” to overcome his fears.  If I hacked him in company he was no better than when alone and I was concerned that his spookiness and my lack of control could put another horse and rider and other road-users in danger so I had stopped hacking Guy altogether.  However Antonio was keen that I hack Guy regularly to increase his work-load, get him moving more and so that his feet would feel and respond to surfaces other than arenas.  I think my initial response to Antonio was, “Well if you think he needs to hack then you can take him out”.


However, it got me thinking a bit more creatively and at that time I had a small, steady through-flow of really nice young Irish horses.  They were all different from one another but had one thing in common, they knew how to just keep going forward - whatever.  So I rode one or other of these baby horses and led Guy out on hacks.  Initially Guy spooked, tried to turn for home, barged into the horse I was riding and ricocheted around the end of the lead-rope and all of this behaviour I simply ignored.  I kept my focus on the horse that I was riding and rewarded them for just keep going and the penny dropped for Guy.

Those lovely baby horses taught him that he didn’t need to spook, spin and run, he could simply go past things.   Soon Guy became the ride horse and I would lead one of the babies, and not much later he was happy and confident to hack out alone or in company.

His comfort zone grew and he was thriving, he was more predictable, happier and working and competing successfully at Advanced level.

Next time "Build it and they will come." 26th March