As soon as the crop was taken off the field we began construction work.

Groundwork is slow, expensive and makes everything look a whole lot worse before it looks better.  Eventually we could start the more satisfying work of building above ground and things started to take shape in the way we had envisaged with a few minor hic-ups on the way. 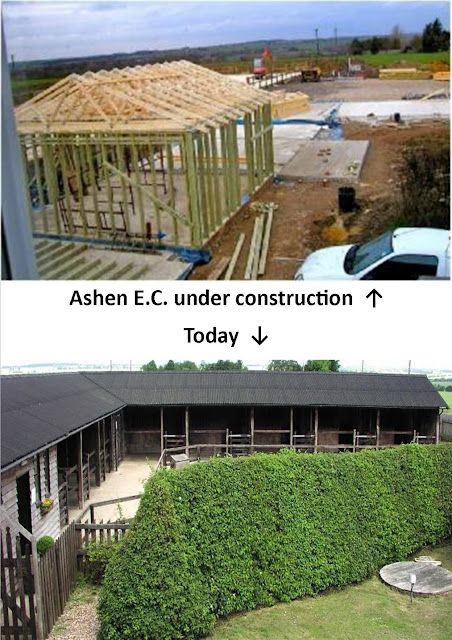 I was in the first-stage of labour while we were putting the surface on the arena, just light contractions, well-spaced apart, and made doubly exciting as we had planned to have the surface delivered directly to the yard, the gates were wide enough for HGV access but a telegraph pole opposite our entrance meant that they could not turn in so we ended up having the surface unloaded at the farm down the road and had to transport it stages in a tractor bucket.  The old tractor has no lights and it was a foggy day so while Chris laid the surface his father drove to and from in the tractor and I drove a car in-front and my mother in law another behind to ensure he could be seen by any cars on the road.  For some reason labour stopped that day (My Mum told me, “If you’d just sit still long enough you’d have that baby.”) but 10 days later I ended up having to be induced and an over-due, very large (hence the name) Max was finally born on the 10th Feb and we were discharged from hospital with less than three weeks to go before our “Open Day” on the 5th March. 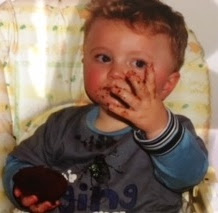 A good sleeper and eater Max was happy to take expressed milk from a bottle and in the care of my brilliant husband or amazing Mum so I could get straight back to work.  My days and nights were spent in a haze of relieved exhaustion the like of which I had never known before or experienced since the first year we opened.

The surface and the arena turned out to be a great success, we invested in superb drainage and used granite (rather than limestone) hard-core which extends further from its edges than a lot of surfaces so the “track” is secure and the going consistent.  Thanks to these decisions and regular maintenance it is as good now, 13 years later, as it was the day it went down, well worth the cost and hard-work getting it right first time around. 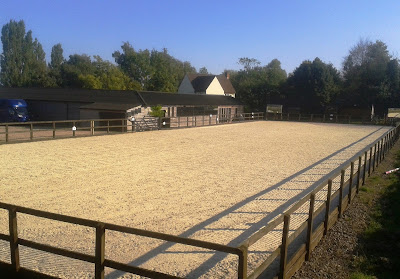 I did not want to have permanent liveries to avoid the risk of people becoming territorial about “their” yard and course participants feeling like the day-girl and boarding school.  It is equally important that horses settle and feel as at home as their owners, so the stables are double-sized, with the rear area stable matted and affording privacy and the front area like a covered patio for space and the opportunity for horses to socialise with their neighbours.  I love this design and I am delighted that it has copied by numerous visitors inspired by their visits to Ashen E.C. since.  (A full-time Dad, Chris also runs the “business” side of things, I have no head for figures, and having designed and built it he maintains Ashen E.C. to the highest of standards.  In recent years he has become fit and well again and now Max is older he has started a small and very successful business of his own designing and building wood-framed buildings, I could not be more proud.  www.ashen-oak.co.uk )

The winter of 2005 was especially cold and windy and I had to put a temporary stop to roofing work as I was concerned that Chris and my Dad who was helping would both end up parasailing with Onduline roofing sheets across the Stour Valley.  Apart from some of the roof everything was done in time for the opening and we were well supported by clients old and new and could not have done it without the hard work and help of family members, Mum, Dad, Fran, Robert, and Paul, thank you all.