I mentioned in Blog 14 “My Guy” that I got creative with the clicker and the help of some lovely Irish horses to resolve our hacking issues.
Those horses came from an Irish man with a passion for what he described as, “Breeding and growing really nice horses”.  At the time he was living in Essex and my friend Lorraine put him in contact with me to assist in bringing his young horses on and then rehoming them.

Michael really knew his horses, could spot a nice horse from a very young age and had lots of space and grass to grow babies.  He had just the right temperament for young horses, they were handled enough that they were ready for life as a ridden horse but not stressed or over-faced and by the time the horses came to Ashen E.C. they were usually rising 4 and had been lightly backed and loose-jumped.  I would school the horses, take them out to low-level competitions in various disciplines and Michael would visit fortnightly to check-up on their progress and to tell me how much each horse was to be for sale for - the price rising with each visit.

We never had any difficulty with rehoming any of his horses, whether pure or part-bred Irish Draught, whether 15hh or 17hh, dressage, jumping, or eventing, they were all lovely horses that sailed through vettings and found excellent homes.

In the meantime I had loads of fun and learned a lot while working with them. 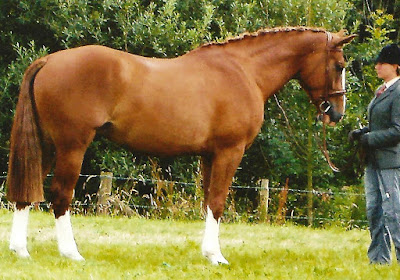 This picture was taken when Mac was 4 by Vicky Slack.  Vicky saw us together at a show and liked the "connection" between horse and handler.  She didn't know Mac or me at the time she took this photo.  A couple of years later she became and client and was sure Mac looked familiar, dug out this picture and gave it to me.  Thank you Vicky! Bxx

I was somewhat disappointed when one day Michael arrived with one of the last of his horses, a then 17.2hh, rising 4 year old chestnut gelding with four white socks and a huge white blaze on his huge and rather ugly head.  Michael had purchased “Mac” and two other colts as weanlings from the Gorsbridge sales and brought them home to Essex.  In spite of being the largest Mac was bullied and did not thrive in the colt herd so Michael turned him out with his mares and foals instead.  Because he was a bit “backwards” Michael did not use his usual groom at home to back Mac as a 3 year old but sent him to a contact in Wales where he grew a bit more and was backed.  Somehow Michael had crammed Mac into his tiny trailer and he more or less tumbled out in the car park, his legs long legs all of a trembling tangle.  I just couldn’t see anything special about this horse and Michael sensed my disappointment but assured me smiling that, “This one is really special”.

Mac’s feet were not in a good way, because he was so big he looked immature for his (young) age and out of proportion and was clumsy and lacking in coordination.  He was needy and demanding and sensitive - and wonderful, Michael was right – again. 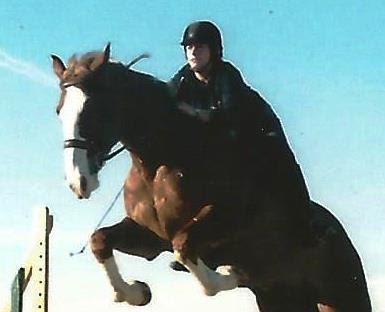 The more I got to know him the more I feel in love with him but at that stage he didn’t move well enough for dressage or jump well enough to showjump and I didn’t have any contacts looking for anything quite so large.  Michael suggested he’d make a good hunter but being so young, so big and so sensitive I was worried that he would end up being hunted and used up by someone large and heavy and didn’t have any contacts in the hunting world to call on.
My sense was that Mac and I needed more time together than Michael was happy to give us and Chris and I discussed buying him but there was no way that we could afford to for me to have had two horses at that time.

Ashen E.C. was still in its infancy and even if I could have found the money to buy him I didn’t have the time or other resources to keep two horses in the way that I now felt was ethical.

In addition Noni was riding more seriously and had moved on to a horse of her own (Filly, more to follow) so time and resources were stretched still further.

Having discussed with Michael the fact I did not have the right contacts to rehome him he was keen that he was advertised outside of my client base and I decided to let fate take a hand.  I placed an advert for Mac, 4 years old, (now) 18hh, and with few miles on the clock, and Guy, 16hh, 11 years old, Warmblood and with BD points on his card.

No-one called about Mac but the phone rang off the hook for Guy.  From all of the callers I selected my “top 5”, they all came to see Guy, 4 of them wanted to buy him and I chose the one I felt suited him the best and, ironically given my past goals, Guy went on to event with his new owner and Mac became my 5th horse.