Our first visit to The Horse of the Year Show was when Mac was 5 and had qualified for the final of the “Search for a Star” class as a Show Hunter.  At the qualification show he was the clear winner but we caused some controversy amongst the judging panel (one of whom was the husband of the professional that I had taken Mac to for advice…) because he was barefoot and although they all wanted him to win they were not sure whether a barefoot horse would be allowed to go to HOYS and when the trophy was presented I was told, “Shoes for HOYS”.

At home I made a lot of phone calls and did my research and eventually established that there was not (yet) a rule to prohibit a barefoot horse from competing at HOYS and that some judges might disapprove, but that was purely discretionary.  So I took my chances and went and, to quote one of the judges, “He won it from the moment he set [bare] foot in the ring”.

It was a day I will never forget.  We were not sure at that stage whether Mac would settle in stabling away from home so loaded up at 2am and arrived at HOYS at 5am.  On arrival we moved all the partitions in the horsebox so Mac could roam around, have his breakfast and settle in.  I took him for a wander around outside and was told my Michael Whittaker, “Nice horse”!!! and at 10.30am we were in the tiny collecting ring ready for our class to start at 11am.  The atmosphere was electric, other competitors in our class were fighting with their horses and their grooms and for space to get warmed up.

Loud music and voices could be heard over the p.a. there was a lot of cheering from an enthusiastic crowd in the adjacent ring but Mac was super cool and listening to me rather than being distracted by our surroundings.  The ring steward lined us up in the tunnel, Mac and I were supposed go in 3rd of 20 or so horses in the class but as the curtains swept back and the Coloured Horses from the class before exited at the gallop the two horses in front of us and one or two behind understandably turned tail and made for the car park too.  Naturally Mac thought about joining them but I asked him to stand still and wait and then we walked in to the ring and he was magnificent. 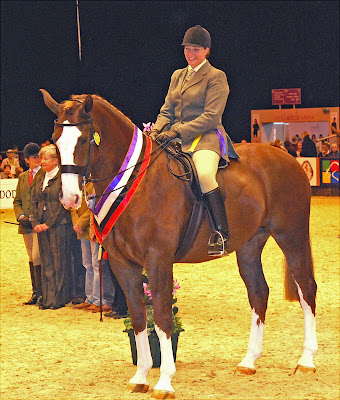 Now re-joined by all competitors Mac was pulled in first after the initial ride around and was foot perfect for the ride judge, in the stand up and trot up for the conformation judges.  The judges announced the results in reverse order, starting with 8th, through to second as Mac and I waited to find out whether we had indeed won or were unplaced – it was quite a buzz.  My parents, one of my sisters and numerous clients were there and we made some new friends too on that very special day.  Thank you all for your love and support of The Big Ginger Horse.