As a professional biomechanics coach my passion is born from the desire for optimal performance and the long-term physical and emotional soundness of horse and rider.  As a horse-lover who had lost a horse to DJD, and had anther with navicular syndrome I knew that I had to learn from, rather than repeat, my past mistakes.

Time and again I see horses’ movement and well-being improved with skilful riding, management, diet and foot care.  Given that horses and the horses’ hoof are such fascinatingly complex structures I should not have been surprised at the positive impact of keeping horses without shoes.  However, what did surprise me was just how incredible it feels to ride a horse properly transitioned to barefoot.  Their proprioceptive awareness, their balance, their sure-footedness and their connection to the ground is something that I miss and now I find it strangely unnerving to ride horses belonging to clients who choose to shoe their horses. 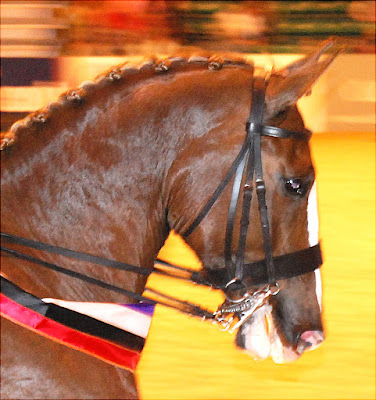 Had the story of Mac’s Showing career ended with our first win at HOYS then it would have been a happy one.

Sometimes Mac’s barefoot status was ignored.  If comments were made they would be things like, “Aren’t you lucky that his feet are good enough to keep him barefoot”, it never seemed to occur to people that his feet might be so good because he was not shod.  Sometimes it was said that it was especially fortuitous given that his feet were white, a measure of the ignorance “well informed” people have about something as irrelevant as hoof pigmentation.  “Do you keep him barefoot because he kicks/is difficult to shoe/to save money?” they might ask in ignorance.  “But you can’t hack him out on the roads/hunt/jump” they would assume – wrongly.

And even when they had seen him moving sure-footedly around the arena some would ask, “But doesn’t he slip?”  Sadly few ever actually asked me why I chose to keep him barefoot - or what the benefits might be.

When Mac was rising 7 an article was published by a show rider and judge [the lady I had taken Mac to for advice as a 4 year old] who was a regular contributor to a national equine magazine and who had a very nasty accident at a county show on a young horse who was shod in front but not behind.  She wrote that while she understood that keeping horses barefoot might; save money, be necessary if your horse’s poor action meant shoes could lead to it injuring itself, or if it was a kicker to reduce the risk of injury to people and other horses, might be sensible if the owner had not trained the horse how to behave with the farrier that there was no place for barefoot horses in the show ring and that it was only a matter of time before an accident caused by a barefoot horse would lead to injury to a ride-judge or competitor and costly litigation to a showground or organiser.

I was very concerned at the implications of this article and wrote to the magazine explaining that although I was sympathetic to the concerns of the writer, given her unpleasant experience, why I chose to barefoot my show hunter.  I wrote that effective barefoot management was not a cost-saving exercise, and was concerned at implications, given that Mac was one of very few barefoot show horses at county level, that my horse’s action/behaviour were bad (when his movement and manners were so excellent).  I also pointed out there was a difference between “proper” barefoot trimming and having a horse shod in front but not behind and a lot of research proving that barefoot horses are not less sure-footed than shod horses.  I explained that as someone who had twice broken my leg, the first time when a horse (shod) had fallen with me, I would not put myself or a ride-judge at risk if I felt being without shoes was a safety issue.  I also pointed out that if ride-judge safety was such an issue then perhaps addressing the prevalence of beagle and bowler hats might be a better start-point.  And finally questioning whether in fact there might be litigious risks with showgrounds full of shod horses.  My response was never published.

It became increasingly apparent that even the judges didn’t know whether or not Mac should be allowed to compete without shoes and our already limited outings (due to the commitments to horses and clients at Ashen E.C) were being affected by this confusion, so I contacted Sports Horse GB for clarification.  (Sports Horse GB are the association to whom horses and riders who want to compete in Show Hunter Classes that are qualifiers for HOYS need to be affiliated to.)  I was told that there was not yet a rule that horses needed to be shod but that due to concerns relating to rider and judge safety as a welfare issue (in case soundness problems were being disguised with surgical shoes/pads etc.) that all horses in their classes must be “shod in the normal way” from the following year.  I offered information and evidence to support the barefoot case – but to no avail and it was, in my view Sports Horse GB’s loss that Mac never competed in a HOYS qualifier again.
It seems all the more ironic that in the last class Mac competed under Sports Horse GB rules there had been so much rain beforehand that the horseboxes were being towed ON TO the showground!  By the end of the class we all looked as if we actually had done a days’ hunting - all horses and riders were so covered with wet mud.  Horses were slipping and sliding everywhere but Mac, as surefooted and wonderful as ever won the final HOYS ticket of his showing career.

Ironically we were often told by ring stewards and judges that Mac was the lightest, best moving Show Hunter that they had seen for years yet no-one ever seemed to see the correlation between this and his barefoot status.

Next time, "You was robbed" published 23rd.