Having decided I was going to be an eventer I needed a horse, within a limited budget, that I could do it with.

In the early years I recommended numerous clients try horses for sale with the dealer from whom I had bought Henry.

A then livery client bought an all-rounder called Emily from said dealer but once back at my yard it turned out that they simply were not suited to one another.

She was a really nice horse but my client felt that she needed something quieter, more predictable and steady.

The dealer could have P/X’d Emily for another horse or she could have tried to sell her on again quickly, but this would have been at a significant financial loss to my client.

I saw a win-win opportunity here because although I didn’t really want a mature horse, not to mention one that was “only” 16hh (My ego needed feeding with a young big horse back then.) I offered to buy Emily from my client for what she had paid the dealer, which meant that she could look for another horse within her original budget and I would have a horse that I could put some competition miles on, then sell at a profit to put towards my “eventer fund". 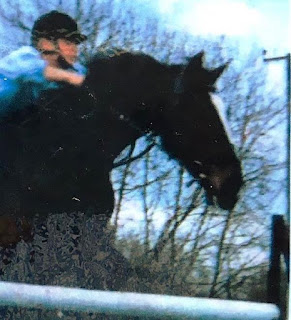 Still preparing and not yet ready to commitment financially or time-wise to become affiliated to BHS and event properly I was still a member of the BSJA and Emily and I were qualifying for Newcomers and Foxhunter second-rounds with relative ease and won or were placed highly every time out at dressage.
We also did some Riding Club eventing and were regularly placing and winning at Open level within a year.
She was a bit quirky and sometimes mareish but we just hit it off and had something really special.
But sometimes when something special comes your way you may not realise quite how special it was - until it’s gone.

Meanwhile the client from whom I had bought Emily was struggling to bond with her new horse.  She was a really lovely horse, more solid and reliable than Emily and when I was asked to ride her, whether hacking, flatwork or jumping she was a star, but when the owner rode her she would report back that the horse had been spooky and difficult.  This led to the owner wanting to do less and less with the horse herself and asking me to do more and more.

Our relationship was complex to say the least, I had thought that we were friends, we had shared “stuff” about our lives that you don’t share with everyone.  She was always very lovely to me and would “helpfully” report any gossip she had heard on the yard back to me.  Without fail I would go on the defensive, inevitably resulting in me giving marching orders to the person who had “caused” the problem, until eventually I worked out that the problem lay not with other people, but with me and in our toxic relationship.

Ultimately and with some bad feeling between us we went our separate ways, as did Emily and I, I allowed the relationship with the client to spoil what I had with Emily.

Some years later and to my great delight I was told by the ex-client that she was no longer riding, she was now grooming and her once non-horsey husband had taken up the reins himself and everyone, including the horse, was happy in their new roles.  In the intervening years it turns out that both she and I had done some changing and some growing up.

I should have let the client go sooner, but I should never have let Emily go.  Thankfully the lady I sold her to adored Emily, she thought she was beautiful, just the right size and perfect in every way.  And she was right.