Blog 9 – “Oops I did it again”
* Warning, contains graphic descriptions which some readers may find distressing.

My injury forced me to a re-think to my business and my life.

I had too many horses on livery and a lot of riding lessons to teach so I let the competition horses go and moved to a smaller yard which was close to our now completed house meaning I could get there and back, with and later without (and then again with) crutches.

Six months to the day of being released from cast I was hacking out on Gazelle (who still had the same issues - that I continued to ignore).  The sun was shining, the birds were singing, life couldn’t get any better, the perfect day for a bit of ditch training...

We jumped to and from the verge to the field fairly uneventfully at least three times but on our final attempt a rabbit appeared from the undergrowth on the landing side of the ditch.

Understandably Gazelle ballooned and landed significantly to the right of the rabbit and my intended landing zone, leaving me hanging on around her neck as she attempted to scrabble clear of the ditch.  I decided that getting out of her way was the safest option for us both and jumped clear, landing safely on my feet, so I could not understand why I fell over.

I remember being confused as I tumbled backwards at seeing only one leg being thrown up into the air when I landed on my back halfway down the ditch.

It took some effort to sit up, I used the grass to pull myself to sitting awkwardly on the bank of the ditch and looked down to see my right leg where is should be, but my left looking most peculiar, the foot somehow back-to-front.

I looked at is dispassionately for some time and thought, “I can’t leave it like that” and picked it up and turned it the right way around again and remember being surprised at how rubbery it felt.

Then I started making a lot of noise, I was in pain and I was angry, really angry with myself and with the world.  I gathered myself somewhat, Gazelle was of course on her way home, I hadn’t told anyone where I was going but by now I had a mobile phone – but no signal, so I got angry again.

Not long later I saw a dog walker in the field and called to them for help.  He didn’t hear me, now I was really angry, how could he not hear me?  I was making a lot of noise and flailing one arm then the other but he and his dog continued their walk in the opposite direction oblivious.  So I decided that over the ditch and towards the road was the best option in terms of being found.

I cannot describe how difficult and painful that journey was, but I stopped being angry, concentrated hard to keeping my weight on my hands, pulling with my arms and pushing with my right heel, the leg and I made it to the road.  (This was perhaps when I first learned that anger, while serving a purpose on occasion, is not a “state” in which it is useful to spend a lot of time in.)

The road was a quiet country lane, even nowadays it carries little traffic, it’s very narrow and cut into the surrounding farmland.  Having decided sanctuary was to be found there, on reaching it I realised I was more or less invisible to oncoming cars and felt very vulnerable.  I dragged myself further along and got as far off the road and into the hedge as I could.

Sometime later to my relief I heard a car but it was coming from behind, rather than towards me and I had a sudden fear that it would drive passed without seeing me.  So I removed my riding hat, and just before the car drew level with me I threw my hat into its path.  Fortunately the driver stopped and asked if I was ok (by now I was fairly well composed, back “in control”).  I told him I had fallen off my horse and broken my leg.  He looked doubtful, and asked if he could help me up and give me a lift home.  I told him in no uncertain terms, “No he could not, just get my Dad!”  (I should explain that my parents lived less than half a mile from my landing sight.)  Bless him, he did and my Dad, Mum and sister Katie soon arrived.

The four of them helped me into the back seat of the car, my rescuer continued on his journey, Mum went home to call Chris and inform everyone at the yard, Katie drove and Dad held my leg, supporting it for the half-hour drive to A&E.

They were both brilliant, we were talking and making “family only” jokes to distract us all.  My Dad is one of the least squeamish people I know but by the time we arrived at hospital he was going a bit greenish grey and had to justify why we had parked in an Ambulance bay and that yes we really did need a wheelchair to get me out of the car.

As long as Dad or I held the leg then my foot was facing forward, it was still encased in my riding gaiter but the leg was a lot shorter and fatter than my right.  The hospital staff were insistent that we would not know whether it was broken until it was x-rayed.  Once the gaiter was removed my foot wonked off at a peculiar angle and they agreed it was probably broken.

And so began x-rays, traction, a temporary cast, more x-rays and finally an operation to insert and intra-tibial nail.

I was discharged after a week or so in hospital, told I was absolutely not to ride as if I damaged my leg again the nail it would either bend and/or shatter my knee or ankle.  I spent a year re-growing bone and began to grow up, a bit. 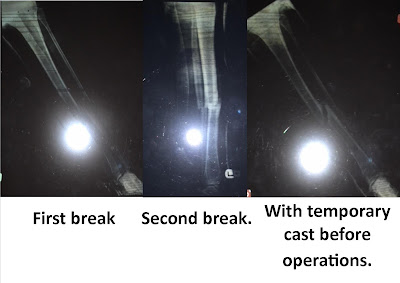 Next time, "The most unlucky person?" published 5th March.